Building Volunteer Leaders in Clubs Around the World 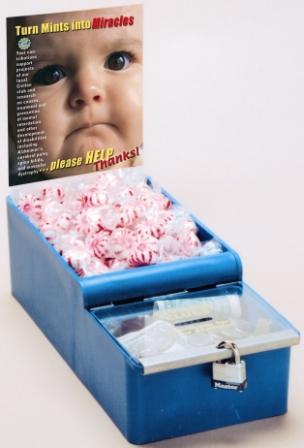 Civitan Charity Candy Boxes can be found throughout the district.  If you would like to see one at your favorite restaurant or store, ask the owner/manager, “Where’s the Candy box?” and then contact us! If your business needs a box, send an email to Ginger Malone and she will get a box or stand out to you right away.

The Civitan Candy Box Project, one of Civitan’s oldest and most successful fundraising programs, has raised $50,000,000 since its inception in 1976. Civitan volunteers place boxes of mints at businesses in their community, and patrons donate money to take a piece of candy. Volunteers collect the money, keeping some for club service projects and sending the rest to Civitan International for its charitable projects.

Candy Boxes were the brilliant idea of members of the Louisville, Kentucky Civitan Club. They thought of collecting contributions for candy and using the proceeds to help retarded children (a non-pejorative term that was in common use at that time).

Recognizing the effectiveness and potential of the effort, Civitan International adopted the project in 1976 and expanded it throughout North America. At first, funds were used for the construction of Cedar Lake Lodge in LaGrange, Kentucky, now a 76-bed IC/MR campus and rehabilitation agency. The Civitan International Foundation contributed more than $1.1 million to the facility. That was just the first of many worthwhile projects to receive Candy Box funds. Over the years, clubs collected more than $50 million from their Candy Boxes, which enabled the Foundation to provide needed funding for a host of service projects that specifically aided people with disabilities. The clubs kept more than $12.5 million for their local charitable projects.  During its peak years of 1988 and 1992, the Candy Box project’s gross income provided one million dollars to the Foundation and was the basis for Civitan’s $20 million financial commitment that gave birth to the Civitan International Research Center. Just recently, Coin Boxes have been added as an additional funding resource. How the money is used: Contributors are most interested in two things when they give money to charity: what the money is for and how much actually flows to the charitable activity.  Twenty-five percent (25%) of monies collected from a Candy box and fifty percent (50%) from a Coin box stay in the local club for local projects. The rest is sent to Civitan International to fund the Civitan International Research Center. Some of the “miracles”:

This is a sample of some of the projects at the C.I.R.C.

Civitan’s other important fundraiser involves the sale of Claxton Bakery’s fruitcakes. This partnership began in 1951 when Tampa Civitan club (#0202) member Earl Carver enjoyed the cake so much that he suggested they be sold nationally as a fundraiser.

Each year during the holiday season, local Civitan clubs sell millions of pounds of fruitcake.

The proceeds from these sales benefit Civitan International’s work with developmentally disabled persons.